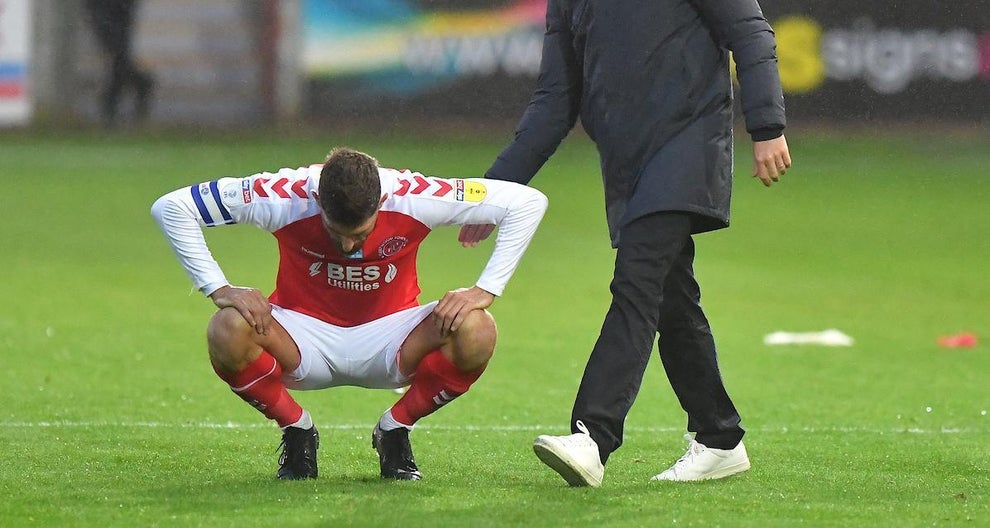 Football is well and truly back and with a bang as Fleetwood were thumped at home by a Wycombe side to put themselves one foot into the Wembley final.

In a game that had everything including three goals in six minutes, two red cards, missed penalty and even a flare somehow being thrown on the pitch! It really was a moment where football had well and truly returned- and for the good!

The madness started in the first minute as David Wheeler won a header from a long ball forward, Fleetwood failed to clear and on-loan Bournemouth striker Nnamdi Ofoborh fired home an absolute belter from just 25 yards out to score his first ever senior goal.
But that lead only last a couple of minutes after referee Tony Harrington awarded Fleetwood a penalty after Wycombe keeper Ryan Allsop had fouled Lewis Gibson.

It was considered to be a strange decision to award it but it was one that Welshman Ched Evans scored sending the keeper the wrong way.The wind was causing both teams problems all night and by the sixth minute Wycombe were back in front as Joe Jacobson took a corner from the right side – and the wind took the ball straight in with keeper Alex Cairns missed it pushing it into his own net. Wycombe had chances to extend their lead further but could not find another goal.And then came the game’s big turning point as in the 33rd-minute Lewie Coyle was sent off for bringing down Jacobson. It seemed a harsh decision as Coyle appeared to win the ball but it his follow through that saw him get a red, incredibly Alex Cairns (Fleetwood keeper) managed to save the penalty from Jacobson and the follow up from David Wheeler.

Wycombe eventually managed to get the third goal in first half stoppage time as Jack Grimmer’s deflected shot managed to find Wheeler who scored past a helpless Cairns to put the Chairboys in the driving seat.Alex Cairns awful night was summed up as he dropped another clanger and the ball fell to Alex Samuel and he had the easy job of just rolling the ball into the empty net.

The 10-man Cod Army were in real danger of conceding more but Cairns this time managed to save one – blocking a shot from Jack Grimmer who was clean through.

With seven minutes left, Fleetwood’s night went from bad to worse when sub Paddy Madden was sent off. Madden who thought he was fouled by Wycombe player Darius Charles but the ref booked him for simulation and was then shown a second yellow for his reaction to the officials. In anger he kicked out at the advertising boards and had to be taken away by the Fleetwood coaching team.

Incredibly, despite no fans being present, a red smoke bomb was thrown on to the pitch, believed to be over a fence from outside the stadium in a night where you can well and truly say a big welcome back to the mad game we love (and hate at times) football.

This was one of the best playoff matches from recent memory, it had everything you could ever have wanted from a game. Wycombe fans let me know your thoughts below – Are you already at Wembley or can Fleetwood muster up a remarkable comeback and based on the first leg I wouldn’t put it past them!

More in League One

McGeehan to stay at Portsmouth?