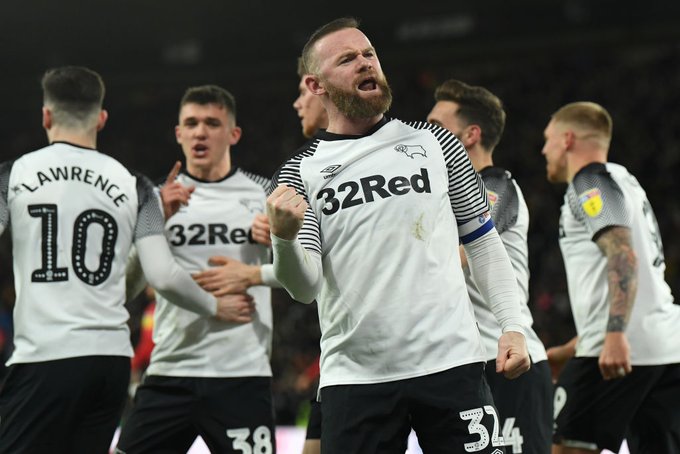 One of the 12 original founding Football League members, the Rams are the most successful club in the East Midlands, having won the English Football Championship twice – twice as many as their nearest rivals Nottingham Forest and Leicester City (once each).

The Rams have come up short in their promotion attempts in recent seasons and were heading for a relegation battle in 2019-20 prior to the arrival of superstar Wayne Rooney on 1 January 2020.

Phillip Cocu’s side subsequently picked up 21 points in the following 12 games, moving them to within five points of the playoff places with nine games to go before the Championship season was suspended on 19 March following the Coronavirus outbreak.

While there has been little for football fans to celebrate for nearly two months, Wayne Rooney posted on Instagram on Wednesday to announce how proud he was to be apart of Derby County’s history.

The former England international and record goalscorer posted to his 15.1 million followers:

“On this day in 1884 Derby County FC was established. Delighted to be a part of it. Thanks to our fans for all the support so far this season, hope you’re all keeping safe.”

Derby County are one of 24 clubs to have won the English top flight and one of only 19 to have won the championship on more than one occasion. Their heyday was in the 1970s when Brian Clough guided the Rams to their first league title in 1971-72 before Dave Mackay repeated the success three years later. European football included matches versus Real Madrid and Juventus, controversially eliminated by the latter in the European Cup semi-finals.

Derby have also spent seven seasons in the Premier League, though the latest of those came back in 2007-08 when they picked up a record low 11 points. They have suffered further disappointment since – losing in the Championship playoff final in 2014 and 2019 to Queens Park Rangers and Aston Villa respectively.

Derby were also winners of the FA Cup in 1946, the first edition after World War II. It was the only professional football tournament that took place in England that season as there was no league campaign again until 1946-47.

As well as Wayne Rooney, other notable footballers to have played for Derby County over the years include Steve Bloomer, Kevin Hector, Archie Gemmill, Roy McFarland, Fabrizio Ravanelli and Peter Shilton.

EFL Clubs Told Not to Return to Training Before 25 May